A rally on Sept. 30, 2021, in downtown Toronto marking the first National Day for Truth and Reconciliation. Shutterstock, by Shawn Goldberg. 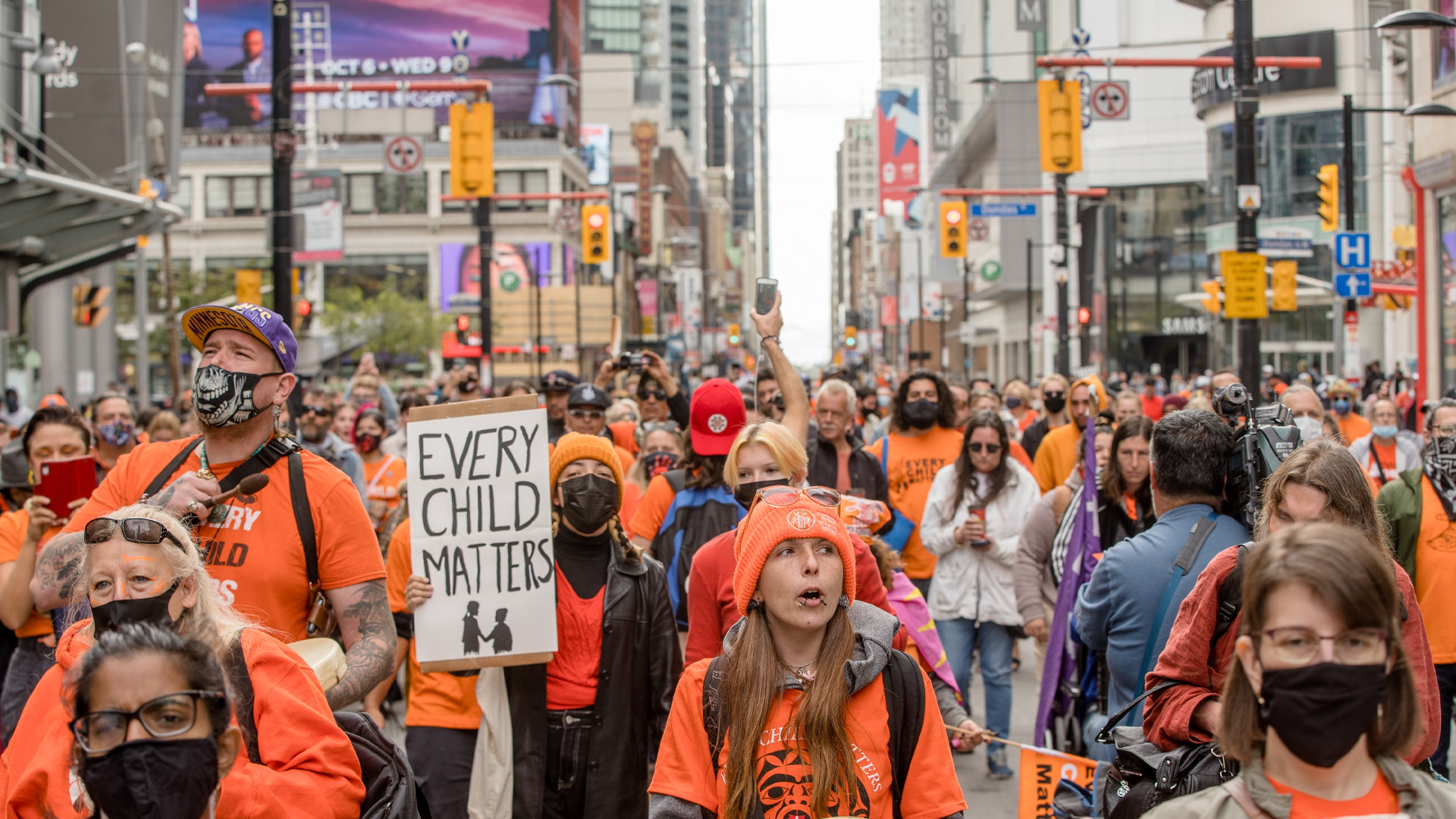 Land acknowledgements aim to raise awareness and facilitate Indigenous reconciliation, but more tangible acts would give meaning to their words. by Christopher Alcantara January 10, 2022
Share

It has become common practice at universities to open meetings and public lectures with a land acknowledgement. This is an official statement to acknowledge that the activities about to take place are occurring on the traditional lands of specific Indigenous communities, as well as to honour and express gratitude to past and present Indigenous Peoples connected to these lands. Land acknowledgements are also meant to raise awareness about the colonial foundations of Canada in hopes of eventually facilitating reconciliation between Indigenous and non-Indigenous peoples.

At first glance, land acknowledgements have been effective at advancing these goals, given their widespread use across not only universities, but also in government offices, public spaces, and by civil society actors such as businesses and nongovernmental organizations. At the same time, there is growing frustration among some prominent Indigenous voices toward these land acknowledgements questioning whether there should be significant changes to make them more meaningful in today’s evolving political and social contexts.

If these critics are right, then perhaps it is time for universities to consider taking more concrete action to facilitate reconciliation.

At my university, the first official land acknowledgement was delivered at convocation in the spring of 2016, and it has been delivered at most public events since then. Current university policies encourage us to write our own land acknowledgement that reflects on our privilege and positionality in a way that ensures Indigenous communities are front and centre. To help us do this, the university has provided us with three excellent templates. Here’s the most detailed one (version 3 in the link):

“We/I acknowledge that Western University is located on the traditional lands of the Anishinaabek (Ah-nish-in-a-bek), Haudenosaunee (Ho-den-no-show-nee), Lūnaapéewak (Len-ahpay-wuk) and Chonnonton (Chun-ongk-ton) Nations, on lands connected with the London Township and Sombra Treaties of 1796 and the Dish with One Spoon Covenant Wampum. With this, we/I respect the longstanding relationships that Indigenous Nations have to this land, as they are the original caretakers. We acknowledge historical and ongoing injustices that Indigenous Peoples (First Nations, Métis and Inuit) endure in Canada, and we accept responsibility as a public institution to contribute toward revealing and correcting miseducation as well as renewing respectful relationships with Indigenous communities through our teaching, research and community service.”

This statement is a powerful one. It acknowledges the identity of the original landowners, commits us to a respectful relationship with them, recognizes the historical and continuing injustices they face, and declares that we have a responsibility to educate people and renew relationships with Indigenous communities. But are universities doing enough to put these powerful words into action?

In a recent paper, Deanne Leblanc argues that the inability of non-Indigenous Canadians to engage in meaningful reconciliation may be rooted in the fact that we think of ourselves as Canadian citizens who are the rightful and longstanding owners and occupants of the territory of Canada. Instead, she suggests, true reconciliation requires us to think of ourselves as “foreigners from within” (what she calls “colonial denizens”), or uninvited guests who may or may not be invited to stay. Thinking of ourselves in this way, she argues, may help us figure out what are the most effective ways for us to advance decolonization and reconciliation.

What might this mean in the context of university policies that encourage staff, faculty and students to engage in land acknowledgements? While the following options vary considerably in terms of how easy they are to implement, all of them are potentially doable with strong commitment from the wider university community. They also require the university to consult with Indigenous leaders and community members to think through which of these options are most appropriate to pursue, given the particular context of each university.

In its most extreme form, thinking like a colonial denizen or foreigner from within should mean universities transferring ownership of their lands under Canadian law back to those Indigenous communities displaced by the universities and paying them rent to continue using the land, given that land is at the centre of Indigenous communities and the core of the colonial project of Canada.

Failing that, more risk-averse universities might maintain ownership of their lands but pay a significant financial gift each year in recognition of their foreigner status on Indigenous traditional lands. How does 10 per cent of revenues sound?

While both of these options most closely honour the spirit and intent of the land acknowledgements adopted by Canadian universities, they are unlikely to happen.

Podcast: A citizen’s guide to reconciliation

A more realistic option may be to provide tuition waivers to all incoming Indigenous students connected to the communities displaced from the lands on which the universities reside. There is some precedent for this idea, albeit on a smaller scale. My colleague Amanda Friesen recently pointed out to me that her former institution, Indiana University, offers a scholarship “to any incoming or current IUPUI student whose family was displaced during the establishment and building of the downtown IUPUI campus.” Canadian universities could do the same for all Indigenous Peoples that they displaced. This would be a powerful and tangible way of decolonizing the university and matching actions with the words found in land acknowledgements.

If universities are lukewarm to this idea, perhaps a good first step toward these bigger ideas would be to pay local Indigenous communities a fee for every time they invite a speaker to visit campus to give a talk, or whenever a land acknowledgement is given. Universities could also seek formal permission from local Indigenous communities every time they wish to bring in a guest speaker.

Land acknowledgements were meant to raise awareness of and honour Indigenous communities that were and still are connected to the lands on which universities are located. But over time, they have become meaningless words, critics argue. It’s time for universities to either honour the commitments made in their land acknowledgements, or to drop them altogether and acknowledge that they are in fact deeply colonial institutions incapable of meaningful reconciliation.