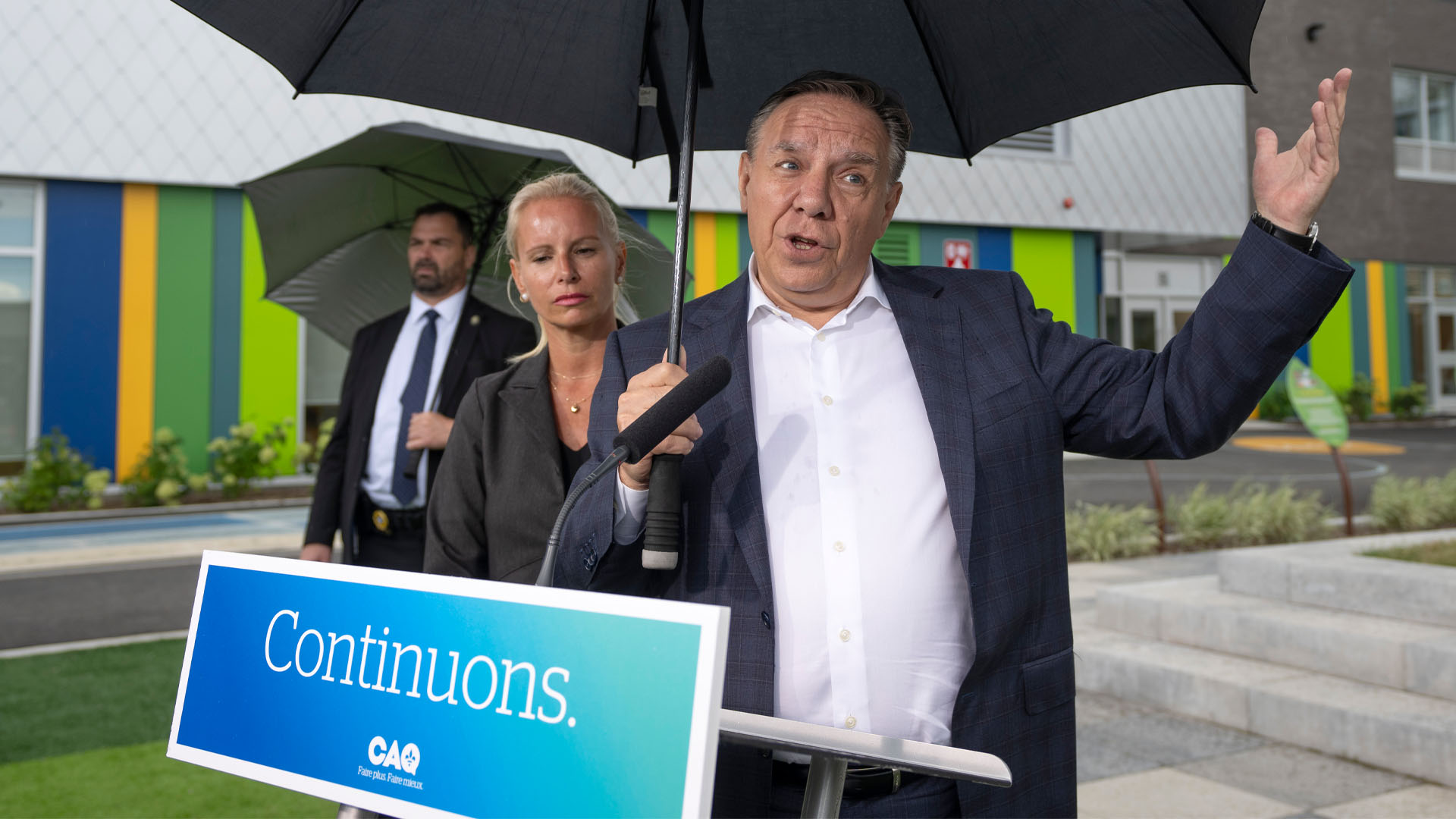 The election campaign underlines some undemocratic tendencies in the province, from an unrepresentative electoral system to handcuffed courts. by Patrick Déry September 5, 2022
Share

Let’s stop kidding ourselves: No matter the promises or what else happens between now and the end of the Quebec election campaign, the governing Coalition Avenir Québec is on course for a big win.

There will undoubtedly be surprises. Conservative Party Leader Éric Duhaime may get 10 members elected to the National Assembly. The Liberal Party may disintegrate further. The Parti Québécois may be able to save itself and prevent incumbent MNA Pascal Bérubé from sitting alone. Québec solidaire may form the official opposition. Some of this and more could happen on Oct. 3.

But it won’t change the final result: the CAQ will clean up with a large majority of seats because of the political context and electoral math.

In its four years in power — despite the pandemic, the economic crisis, inflation and a host of other issues — the CAQ has almost never fallen below 40 per cent of voting intention as measured in polls. If a pandemic and runaway inflation can’t put a dent in that popularity, it’s hard to imagine what calamity could alter the course of electoral destiny in the next three weeks.

This is not a judgment on the government’s record, but a simple observation. In the face of a fragmented opposition, this stable support for the government has unavoidable consequences and leads to certain conclusions.

In 2018, the CAQ won 60 per cent of the seats – 74 out of 125 – with only 37.4 per cent of the vote. Nothing has changed since then, apart from the recent rise of the Quebec Conservatives, which further divides the vote.

On a battlefield, it’s best to limit the number of opponents. However, in Quebec politics, the more opponents the government has, the more likely it is to stay in power. This is the first problem. Our voting system is broken. With only 40 per cent of the vote, the CAQ could win nearly 80 per cent of the seats, as noted by the Qc125 website.

The evolution of our society and the multiplication of streams of thought that inform our political parties have overtaken our two-century-old voting system. The more our political options diversify – good news, in principle – the worse it gets. Under current conditions, the CAQ could probably form a “majority” government with 35 per cent of the vote or less.

Imagine you rent a bus with 20 friends for a trip. On the day of departure, everyone boards and as soon as seven or eight people agree on a destination, they lock the doors and head out, dragging the other 12 or 13 people along for the ride. This is where Quebec is politically.

The problem is not new. For 60 years, the system has been broken. In all but two elections, more Quebecers have voted against the party that formed the government than for it. It is beyond time to do something about it.

In election after election, our voting system betrays the majority and our representative governments are less and less representative. But it gets worse. The whole democratic edifice is quietly crumbling before our eyes.

We could try to console ourselves by saying about 40 per cent of Quebecers will be represented in the next government, which is not so far from half. And that the separation of the three pillars of the state – the executive, the legislative and the judicial — still means something.

In theory, this is true.

In principle, the executive power – the people who make day-to-day decisions – lies with the cabinet. In practice, however, this power is concentrated around the premier and his close entourage, including many unelected officials. A few ministers have some influence; the others follow orders.

It is even worse among members of the legislature. The hope of getting into cabinet encourages them to follow the party line even before they are elected. This has been seen again recently, with the announcement of high-profile candidacies who immediately disavowed previous beliefs.

It is the responsibility of individual members to consider, amend, pass or even reject bills, regardless of their political affiliation. But in practice, government members always follow the party line and a majority government is nearly guaranteed to have bills passed sooner or later. If the opposition tries to stretch debate too long, closure is invoked and the law passes.

In principle, the National Assembly is sovereign in the exercise of legislative power. In practice with a majority government, it simply rubber-stamps government bills. The same is true on any matters that come for a vote, including motions for censure on ethical issues, which almost always divide along partisan lines.

The opposition parties have difficult work, made even more difficult when their ranks are thinned.

This raises a practical problem. Parties need 12 seats to be guaranteed official party status, and to benefit from the budgets and staffing that comes with it. But they also need a minimum number of members just to function properly in the legislature. A single elected representative can’t be an effective opposition critic for health, justice, the environment and the family, in the face of ministers with an army of civil servants and political staffers behind them.

Yet this is likely what is in store.

The Quebec charter out of the picture

That leaves the courts as a democratic safeguard. In principle, the judiciary is the third branch of government that controls the excesses of the other two, the legislative and the executive.

In this respect, the current government has distinguished itself from predecessors by blowing up the last bastion. The CAQ is not the first party in Quebec to use the notwithstanding clause, which allows a law to be exempted from the application of certain sections of the Canadian Charter of Rights and Freedoms. However, when Bill 21 (on secularism) was passed, the CAQ also gutted the Quebec charter of rights.

This is major. The Quebec Charter of Human Rights and Freedoms is the closest thing to a Quebec constitution. By convention, from its adoption in 1975 until the CAQ came to power, the charter had been amended only with support from all parties in the National Assembly (a few individual members have abstained or opposed on such votes).

Moreover, the Legault government used closure to cut its way through the Quebec charter, removing this fundamental aspect of the debate from a detailed examination by the opposition parties. This is not a technicality. First, democracy is not the dictatorship of the majority. Second, when you change the rules of the game in the middle of the game, everyone should agree. (Yes, the repatriation of the Canadian Constitution in 1982 also failed to follow this principle. This too is a problem.)

The outgoing government’s narrowing of judicial review did not stop there. When Bill 96 was passed, no chances were taken: no fewer than the first 38 sections of the Quebec charter were preventively suspended.

These sections affirm the right to life, personal security and freedom. Freedom of conscience, religion, opinion, expression, peaceful assembly and association. Safeguarding dignity, honour and reputation. Respect for private life. The right to peaceful enjoyment and free disposal of property. The inviolability of the home. Professional secrecy. The exercise of these rights and freedoms without distinction as to race, colour, sex, gender identity or expression, pregnancy, sexual orientation, civil status, age, religion, political convictions, language, ethnic or national origin, social condition or disability. Among many other things.

That’s a lot of fundamental rights to set aside for a language law, important as it may be.

By controlling the levers of power and neutralizing checks and balances in advance, a majority government of any stripe can ensure that it can do pretty much as it pleases for four years.

Even if this government was brought to power only by a minority of Quebecers. Even if it is in fact run by a handful of people around the premier.

But this combination of executive steamroller, a subservient legislature, handcuffed courts and the broken promise to make the voting system fairer is met with indifference from too many voters and those who influence them.

With each passing election, the Quebec political bubble – including many of those who comment on it – seems to forget the exercise of democracy is not just about one party getting 40 per cent of the vote once every four years and ignoring the majority who did not vote for it the rest of the time.

This exercise should also include the humble acceptance that other strains of thought exist, that they need to be represented, that the premier is not an elected king, and that the annoying checks and balances that circumscribe his action are there for a reason.

Unfortunately, from election to election, the winners care little about this, convinced that they are right, and justified in ramming their vision down the majority’s throat. And democracy continues to slowly erode.