Why the USMCA will enhance online free speech in Canada

Internet free speech is not typically an issue associated with trade agreements, but a somewhat overlooked provision in the newly minted US-Mexico-Canada Agreement (USMCA) promises to safeguard freedom of expression by encouraging Internet companies to resist pressure to remove content. The USMCA’s Internet “safe harbour” rule — modelled on US law — remedies a long-standing problem in Canada that left large Internet platforms reluctant to leave third-party content such as product reviews, blog posts and social media commentary online in the face of unsubstantiated complaints.

Once the agreement is implemented, Internet companies will benefit from assurances that they will not face liability for failing to take down third-party content, or for proactively taking action against content considered harmful or objectionable. While the safe harbour provision does not apply to intellectual property, the USMCA protects Canada’s notice-and-notice system for copyright, whereby rights holders can file complaints over alleged infringements but there is no takedown procedure for the removal of content. Taken together, the Canadian legal framework will encourage free speech, largely looking to court orders for mandated takedowns of content or good faith efforts by platforms to address harmful content.

The absence of a Canadian safe harbour rule has meant the same companies that require court orders before the removal of content for claims originating in the US frequently take down lawful content in Canada based on mere unproven allegations, due to fears of legal liability. Further, the absence of safe harbour protections has created a disincentive for both new and established services to use Canada to store data or maintain a local presence.

The Internet safe harbour approach originated in the earliest days of the commercial Internet. In 1996, the United States enacted the Communications Decency Act, legislation designed to address two emerging concerns: the online availability of obscene materials and the liability of Internet services for hosting third-party content. The US Supreme Court struck down the obscenity provisions on constitutional grounds, but the safe harbour rule remained intact and quickly emerged as a cornerstone of US Internet policy.

Indeed, the safe harbour provisions have been characterized as the single most important legal protection for free speech on the Internet. Over the past two decades, every major Internet service — from Google to Amazon to Yelp — has turned to the provision to ensure that courts determine what is lawful and permitted to remain online.

Despite the free speech benefits, the rules can be controversial, particularly since disinformation on social networks is an increasing concern. Policy-makers and the public have been pressuring online providers to more proactively address online harms. The challenge is to balance the benefits of removing illegal or harmful content with the risks of various measures — such as active monitoring of content and the use of upload filters —that may ultimately curtail free speech online.

The agreement permits implementation of the safe harbour provision in several ways, stating that “a Party may comply with this Article through its laws, regulations, or application of existing legal doctrines as applied through judicial decisions.” While the US approach involves statutory protections, Canada may initially rely on legal doctrines through judicial decisions.

That could involve refraining from implementing new rules that hold Internet companies liable for third-party content on their systems, and leaving it to the courts to reject claims that run counter to the safe harbour principle. In doing so, officials would maintain the need for responsible conduct by Internet companies without overbroad monitoring or unwarranted takedowns of content.

Canada has sought to jump-start the innovation agenda by prioritizing measures that might attract global Internet giants and facilitate the development of homegrown success stories such as Hootsuite and Spotify. The USMCA safe harbour provision removes a significant legal barrier to that agenda by reducing liability risks for business and providing Canadians with long-overdue safeguards for Internet free speech. 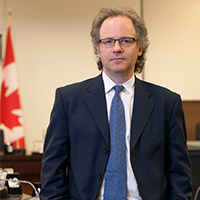 Michael Geist
Michael Geist holds the Canada Research Chair in Internet and E-commerce Law at the University of Ottawa, Faculty of Law.
View all by this author
X

Why the USMCA will enhance online free speech in Canada