The Liberals are largely delivering on their commitment to bring greater diversity to federal appointments. by Andrew Griffith December 9, 2016
Share

The Liberal government promised a diversity and inclusion agenda, and made specific commitments to ensure more inclusive representation in appointments. A year later, how well have they implemented this commitment? In contrast, the appointments of the most senior public servants (39 deputy ministers and associate ministers) are less representative of diversity than at the political level: 17 women (44 percent), 3 visible minorities (8 percent) and no identifiable Indigenous persons. However, as shown in figure 2, this shows more diversity than the pre-Trudeau government baseline, although not with respect to Indigenous persons. Of the 41 judicial appointments made by the Trudeau government, 23 were women (56 percent), with two visible minorities (5 percent) and three Indigenous appointments (7 percent). Figure 3 contrasts 2016 appointments with the baseline, separated out by appointments to federal courts and federal appointees to provincial courts. With respect to the 9 appointments to the federal and provincial supreme courts, 4 were women and 1 was an Indigenous person.

Given the nature of the Privy Council Office’s Governor in Council appointment index, it is not possible, in a timely manner, to assess the diversity of appointments outside the deputy minister and judicial realms.

In April, the Ottawa Citizen’s columnist Andrew Cohen wrote “Justin Trudeau has told Global Affairs that its list of career candidates [for Head of Mission, or HoM appointments] has too many white males and asked it to do better next time.” Some six months later we can judge how well Global Affairs Canada responded to the PM’s direction, given that most if not all ambassadors and consul general appointments were made as part of the customary summer rotation in the foreign service. Moreover, as we have a complete list of their position classification levels, we can compare the diversity with respect to more senior and junior positions.

Figure 4 breaks down these overall numbers by classification level. The classification level of the individual head of mission (i.e., EX5, EX4) may be either greater or lower than the position level they hold,  but the latter provides a more consistent basis to assess these appointments (as well as avoiding privacy issues). 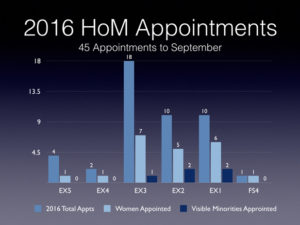 Not surprisingly, there is greater representation of women and visible minorities in appointments at more junior levels, particularly apparent between EX4-5 (assistant deputy minister level) and EX1-3 (director general and director level), as shown in figure 5 (two-thirds of HoM positions are classified at the EX2-3 level). This suggests that over time, women and visible minority representation at more senior levels will increase. So, what does this mean in terms of the overall commitment to great diversity among appointments? The evidence to date indicates that the government is largely delivering on its commitment with respect to women and visible minorities but less so with respect to Indigenous persons.

The real test will occur with respect to Governor in Council appointments, given that these attract less public attention and happen largely below the radar. Given the government’s track record to date, it is likely that representation will improve, but the government needs to ensure that, at a minimum, its index of appointments allows easy tracking and, ideally, an annual public diversity report.

However, almost one year in, this appears to be one commitment met.

Note: I am grateful to Global Affairs Canada for having provided the classification data. However, as an illustration of the limits of the newer, more open approach, they did not provide this information in spreadsheet form, using the (false) argument that: “Understandably, the GoC cannot send records in a spreadsheet format that could otherwise be manipulated or ‘edited.’ ” (Fortunately, I have software that can convert a scanned pdf into spreadsheets or documents). I am also grateful to the Privy Council Office for providing some of their internal tracking documents, which have 25-year data with respect to women, in spreadsheet form.