The U.S. can sometimes take Canada’s support for granted. With a new administration in place, Trudeau should push back and change the dynamic. by Christopher Sands January 27, 2021
Share

Shortly after his inauguration as the 46th President of the United States, Joseph Biden issued an executive order to revoke the presidential permit for the Keystone XL pipeline. Biden’s spokesperson later announced that the president’s first call with a foreign leader would be with Canadian Prime Minister Justin Trudeau, a consolation prize of sorts.

Following Biden’s KXL permit cancellation, Trudeau made excuses for the action. Biden had campaigned on canceling the permit, so this was not a surprise. There are larger issues at play such as the completion of work to upgrade Enbridge’s Line 5 pipeline that crosses through the United States to deliver Canadian oil to Sarnia, Ontario. And there is great potential for Canada to work with the Biden administration on climate change policy, so it is better not to make a fuss over KXL now.

All of that is true, and Trudeau’s response is tactically sound. But it misses the larger, strategic issue that Biden’s swift move against KXL raises: three U.S. presidents in a row appear to have judged that there is no cost to crossing Canada. Former president Barack Obama and Biden over KXL and former president Donald Trump over NAFTA, national security tariffs and more.

This serious problem warrants a reset in Canada-United States relations, and the start of a new administration is an opportunity to do just that, particularly at the start of this administration. Biden’s position is weak domestically, and as a committed multilateralist, he needs allies like Canada to help him to achieve his goals internationally, from addressing climate change to sustaining the challenge to China and Russia. Far from being helpless, Canada’s position vis-à-vis the Biden administration is strong, making this the time to push back.

President Biden now leads a bitterly divided country. He won the election with more votes than Trump, but Trump won more votes than any losing candidate in U.S. history. Democrats underperformed in congressional and state races, and although the House of Representatives and Senate are controlled by Democratic majorities, the margins are narrow. This means that confirmation officials to staff the administration, budgets and other legislation will proceed only if House Speaker Nancy Pelosi and Senate Majority Leader Chuck Schumer can count on nearly every Democratic representative and senator to vote together, and holdouts gain enormous leverage within the Democratic caucuses. Yet, since the Democrats are nominally in control of Congress, voters will blame Democrats for what is done and not done regardless of the level of difficulty.

It is no secret that the two main political parties in the United States are also divided, with activist fringe groups in each party pulling the Democrats and Republicans away from centrist positions. Biden was a compromise candidate for Democrats, and historically has been more in tune with centrists than the party’s progressives. The same can be said for Pelosi and Schumer. What unites Democrats has been opposition to Trump. This is why Pelosi pursued a second impeachment of Trump and also why Biden made executive orders that undid Trump executive orders – such as Trump’s approval of a permit for the KXL pipeline – his first priority. Instead of showing strength, both Biden and Pelosi have acted in ways that reveal their weak hold on support from the Democratic base.

The challenges facing Democrats in Washington domestically and internationally are staggering. In the 2020 elections, Democratic candidates charged the Trump administration with mishandling the U.S. response to the COVID-19 pandemic, but this partisan framing of the pandemic raised expectations that Democrats would do better once in charge. Trump’s economic lockdowns put millions of Americans out of work and out of school, and now the pent-up frustrations of those Americans will be directed at Biden. Ottawa and Washington have added to their respective national debts in order to keep economies afloat, but the COVID-19 induced recession will widen budget deficits by reducing tax income for governments at all levels, with some municipalities in serious financial difficulty.

The same economic and public health challenges are affecting all countries, but they have not lowered regional tensions in the Middle East, Korean peninsula, or the South China Sea. Great Power competition puts Biden under extra pressure to recapitalize the International Monetary Fund and other global financial institutions lest China take the lead in funding recovery for developing countries with strings attached. As the Trump presidency made clear, multilateral institutions from the World Health Organization to the World Trade Organization need reform but remain the best venues for addressing tensions between the United States and other Great Powers. Biden will need the support of middle powers like Canada to restore American leadership.

The need for a reset

Past crises tended to strengthen Canada’s relationship with the United States by building trust and mutual understanding. Cooperation in establishing new institutions and policy responses after World War II and even after the September 11 terrorist attacks on the United States institutionalized cooperation on a range of issues and provided Canada with a way to communicate with U.S. leaders that benefitted Canadian national interests.

And yet there have been times when Canada needed to challenge the United States in order to remind Americans not to take Canada for granted. In 1951, Prime Minister Louis St. Laurent threat to build the St. Lawrence Seaway without the United States led U.S. President Dwight Eisenhower to sign a 1954 agreement to build the Seaway together. In 1960, Prime Minister John Diefenbaker appointed Vincent Bladen to lead a commission to study the trade imbalance with the United States in the auto sector; Bladen’s report prompted Canada to increase tariffs and incentives to support Canadian production, prompting the negotiation of the U.S.-Canada Auto Pact by Prime Minister Lester Pearson and U.S. President Lyndon Johnson in 1965.

It is because of that weakness the Biden administration is not taking Canadian interests into account and it is for this reason that there needs to be a reset.

To be clear, I am not advocating that Canada pick a fight with the Biden administration because it is in a weak position domestically and internationally. I am suggesting, it is because of that weakness the Biden administration is not taking Canadian interests into account and it is for this reason that there needs to be a reset. Canada needs to make it clear that our support is not unconditional and that actions that hurt Canada will be not be accepted with a smile.

The United States constitutional design makes the country hard to govern. This produces complex domestic politics that force U.S. presidents and the Congress to preoccupy themselves with the domestic forces that determine the success or failure legislative initiatives or an administration. U.S. foreign policy therefore tends to respond best to international crises and opportunities. The success of Canada-U.S. relations has been its fatal flaw. For the Biden administration, Canada does not appear to present a crisis or an opportunity that warrants careful attention to Canada.

The Trudeau government should seek to change that dynamic. The Biden administration’s early action against the KXL pipeline is a wakeup call for Canada that Biden’s friendly disposition toward Canada over the years is insufficient to safeguard Canadian interests. Canadians should not take good bilateral relations for granted, and neither should the United States.

Christopher Sands
Christopher Sands is director of the Canada Institute at the Woodrow Wilson International Center for Scholars and professor of Canadian Studies at the Johns Hopkins University School of Advanced International Studies, both in Washington DC. He is a member of the board of directors of the Institute for Research on Public Policy, which publishes Policy Options.
View all by this author
X 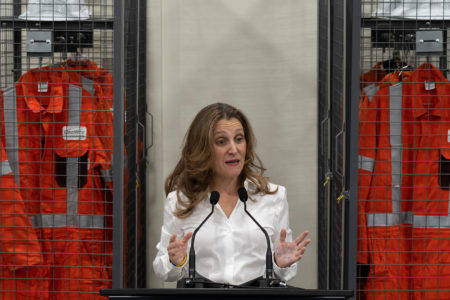