The Catalonian independence movement has damaged Spain’s reputation internationally and the region’s own progress. Many issues remained unresolved. by Miguel Aguilar November 26, 2019
Share

In the early 20th century, Barcelona came to be known as the “rosa de foc,” the rose of fire. Public disturbances arose around the city’s harbour, where troops embarked for the unpopular Rif war being fought between Spain and Berber tribes in Morocco. A century later, Barcelona’s incendiary nickname appears more pertinent than ever. This past October, protests erupted over the sentencing of nine secessionist leaders by the Spanish Supreme Court.

The protests are happening as other uprisings unfold in Hong Kong, Santiago, Beirut and Quito. But Barcelona’s situation has a very particular and complicated backstory. Any attempt to explain away the protests as a part of generational revolt against authority would miss the point.

The current crisis dates back to 2010, when the Spanish Constitutional Court ruled against several articles of a new regional constitution passed following a referendum in Catalonia. Nationalist elites saw the ruling as an offence. Two years later, the moderate nationalist centre-right party, Convergencia i Unio, which had been in power for 32 out of 39 years in Catalonia, decided to adopt independence as a clear goal. It had been facing an economic crisis and falling popular support, and was building on a decades old, low-key nation-building project.

The economic argument “Spain steals our money,” which can be easily rebutted with facts and figures, took emotional hold. A manipulated history of grievances and humiliations was put to the fore. Support for an independent Catalonia, which had remained below 20 percent since the transition to democracy, shot to 40 percent and higher. Tactical use of terms such as “self determination,” “pursuit of sovereignty” and “right to decide” were used to justify the calling of a referendum to decide on independence, with Quebec’s case and later the Scottish case presented as models.

The Spanish constitution, however, does not allow for such a referendum to be held, as sovereignty is regarded as being held by the whole country. Regional elections in 2012, 2015 and 2017 have shown that Catalan society is evenly divided between pro- and anti-independence, with a majority of votes being against, but the independentist parties hold a parliamentary majority due to the overrepresentation of deputies from rural Catalonia in the parliament. Within the independentist movement, there is further polarization, with nationalist parties trying to outflank each other, and the outsized influence of the radical Candidatura d’Unitat Popular (CUP).

A first illegal vote was held in November 2014, to which the Spanish government turned a blind eye. However, in September 2017, two laws were passed, one that allowed for a binding referendum to be held on October 1 and another one that set the basis for the separation with Spain and the setting of an independent republic.

Despite warnings from the constitutional court and the central government, the Catalan government went ahead and held the announced vote. In a late and clumsy attempt to stop it, Spanish police intervened in polling stations, serving the secessionist movement the perfect images for their cause – riot police stopping a vote. Just over two million people voted – 43 of those eligible to vote. The lack of an official census and the irregularities that plagued the vote rendered meaningless the overbearing favourable result for independence (90.18 percent). News reports said 1,000 voters were injured, with two people hospitalized.

By then it was obvious Madrid had to act, if only to defend the rights of half the population of Catalonia who hadn’t voted and didn’t want to leave Spain. The King made a solemn speech on October 3 that essentially boiled down to “You are not alone; the constitution and the State protect you.” Article 155 of the Spanish constitution allows for the central government to intervene when a regional government fails to comply with its obligations. A month-long game of chicken ended on October 27, when Catalan president Carles Puigdemont decided against calling for an early election and instead hastily declared independence.

The government decided to use Article 155 of the constitution to simply remove the Catalan government and call for an immediate election. The elections resulted in a similar result to the previous one: the antinationalist party Ciudadanos won the elections for the first time ever, but the pro-independence block could form a parliamentary majority. The national prosecutor pursued, meanwhile, members of the Catalan government, the chair of the Catalan parliament and the leaders of two civil society organizations that were an integral part of the project and had interfered with a judicial investigation. Some leaders turned themselves in, a few others, including Puigdemont, fled.

The trial, which was livestreamed so everyone could watch and no accusations of impropriety could be raised, went on for most of last spring, and the sentence was announced on October 14, 2019. Most of it hinged on the difference between rebellion, which is an attempt against the constitution but which has to include violence; and sedition, which is an attempt against public order but doesn’t require violence.

The inadequacy of the penal code for dealing with complex, contemporary events has been evident, and the sentence was destined to be controversial. The court opted for the charge of sedition, with long sentences of 13 and 11 years for two of the leaders, and softer ones for the rest. It also allowed for early parole, so most of them will be able to leave prison next year (partly because of the harsh and lengthy pretrial detention). That sentence is what stoked the flames of the “rose of fire.”

The Catalan independence movement has been extremely successful in a number of ways. It has mobilized huge amounts of people over a sustained period. It has done so in a peaceful way, until last month’s events. It has portrayed itself internationally as the victim of intolerable oppression and in the past earned considerable support among Western public opinion. It has managed to hide very effectively its dark little secret – that it speaks for less than half the population of the region.

However, it hit a brick wall in October 2017 with the secessionist votes. It has no international allies or influence outside of the easily malleable public opinion and fringe politicians. There is no oppressor state – the only right Catalonia doesn’t have is to become independent unilaterally. If any rights are being overrun, they are those of the non-nationalist half of Catalonia.

Meanwhile, the nasty face of ethnonationalism is increasingly evident. Public media channels have been totally discredited as propaganda machines among half the population, and long-established Catalan accomplishments such as linguistic immersion are being jeopardized. Up to 3,000 businesses relocated outside the region after the October 2017 events. The myth of Catalonia being “un sol poble” (“only one people”) doesn’t hold anymore.

The unilateral strategy that it has followed until now seems to lead nowhere, but no one within the secessionist movement seems ready to acknowledge that and change course. In the meantime, however, it has contributed significantly to the rise of Vox, Spain’s very own far-right party, which became the third largest party in the Madrid parliament in the November 10 elections, doubling its seat count. With the deteriorating situation in Catalonia a prime concern for voters, Vox’s radical, intransigent approach has been seen by many as the best answer.

There are obvious parallels between Quebec and Catalonia, the constitutional question at the start of the crisis, the linguistic issue, and the referendum win as a goal. Still, anyone familiar with Canadian politics will be able to see the glaring differences, the lack of a Clarity Act in Spain being one.

There are a number of lessons drawn from this crisis that might be interesting for composite polities in general, such as Canada, the UK, Belgium or Spain.

The Catalonian independence movement has tarnished the image of a fully functioning Western democracy, one of only 20 countries that can be considered as full democracies, according to The Economist’s Democracy Index, and has damaged, maybe irreversibly, its own institutions of self rule. The new Spanish government needs the support of the secessionist MPs in Madrid, which would mean accommodating their demands for early release of their leaders and a bilateral commission to discuss self-determination. The alternative, a coalition with the rightist Popular Party, seems unlikely and would have an effect on the evolution of Spain’s quasi federal state.

Three key issues need to be addressed, and remain outside the political fray: the legal consequences of the actions of the Catalan government in 2017, the long-term status of Catalonia within Spain, and the rights of non-nationalist Catalans living within Catalonia. The unlikelihood that we can resolve these challenges shouldn’t prevent us from trying. Miguel Aguilar
Miguel Aguilar is a Barcelona-based journalist, editor, and publisher. He is the literary director of several imprints with Penguin Random House Spain, including Debate, Taurus, and Reservoir Books.
View all by this author
X 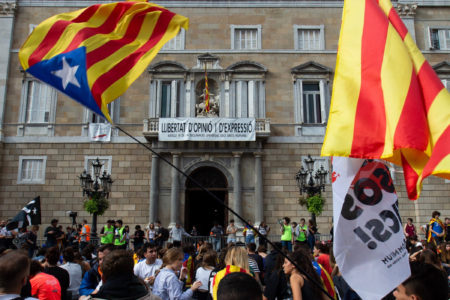