You’ll often hear Ontario voters say it doesn’t matter who they vote for — all politicians are the same. There’s good reason for this attitude. It’s because the scope of political debate in Ontario is narrow and getting narrower.

When was the last time you heard a candidate endorse vouchers for schools? Private access to health care? Referendum and recall? Cutting spending (as opposed to the cop-out “reducing waste”)? Or that most dangerous of policies: restrictions on access to abortion? These are all third rails in Ontario, and Ontario politics has more third rails than the Toronto subway.

So, what is the problem with Ontario? Ontario has an incredibly narrow Overton Window.

Joseph Overton was vice-president of the Mackinac Center for Public Policy, a Michigan think tank. His description of the range of ideas that are politically acceptable is known as the “Overton Window” (figure 1). Rather than placing ideas on a left/right spectrum, Overton talked about a spectrum of government intervention ranging from “more freedom” to “less freedom.” Within the window are the ideas that politicians will espouse without fear of being labelled as outside the mainstream.

The political commentator Joshua Treviño further developed this idea by labelling gradations of public acceptance of political ideas. Ideas that are furthest outside the Overton Window are considered “unthinkable.” As they approach the window they become “radical.” Within the window, policy ideas move from being “acceptable” to “sensible,” then “popular.” Finally, they become actual law.

Figure 1. The Overton Window, along with Treviño’s degrees of acceptance Many policy positions that fall inside the Overton Window in other democracies are considered radical or unthinkable by Ontario elites. The narrowness of the Overton Window in this province is perpetuated by a vicious circle of progressive journalists who hound politicians with the threat of gotcha media coverage, and political actors who manipulate media coverage to demonize their opponents. Besides being narrow, the Overton Window in Ontario has a leftward centre of gravity. When the window does shift, it does so in favour of those radical ideas espoused by leftist voices.

How the NDP loses elections but wins arguments

In Ontario, the NDP fills that role on the left. The NDP advocates for environmental and social causes that normally wouldn’t receive a hearing from the Liberals or Progressive Conservatives. By providing an outlet where supporters of these causes can make their voices heard on election day, the NDP legitimizes these causes in the eyes of the media, who see 10, 15 or even 20 percent of Ontario voters supporting the NDP. This begins the process of moving an idea from “unthinkable” or “radical” to something that polite people can talk about.

When the Liberal Party loses marginal seats to the NDP, this forces Liberal strategists to consider talking about these ideas too. Soon Liberal candidates are making promises on matters they had never thought about before — promises that they may even keep when they get elected.

The PCs, to swing voters from the Liberals to themselves, now have to get in the game too. They must appeal to a public caught up in the discussion of an idea originating on the left. Voters on the right have different concerns but, since they have nowhere else to go, the PCs take those voters for granted. Instead, they pursue the marginal voters on their left flank. So moves the Overton Window.

As public discussion focuses on issues that matter to leftist voters, policy positions harden in the public’s mind. One side becomes seen as acceptable, the other unthinkable; one is mainstream, the other radical. So we have the bizarre situation revealed by a recent poll. Of Canadians surveyed, 43 percent of those who oppose same-sex marriage would refuse entry to immigration applicants who don’t support same-sex marriage. According to the same poll, 26 percent of pro-life voters would reject the applications of pro-life immigrants. Belief in traditional marriage and the right to life have become so firmly planted outside the Overton Window that even their supporters find these ideas offensive in others!

One thing is certain, though. The Overton Window is much narrower for Ontario elites than for the general public. And that presents an opportunity for political entrepreneurs on the right.

There are political parties that challenge modern liberal orthodoxy. They do it successfully, and in some surprising places.

Few places are more liberal than Scandinavia. Yet the Finland-based Finns Party won almost 18 percent of the vote and 38 out of 200 seats in the most recent election. It opposes same-sex marriage and same-sex adoption. It is even against in vitro fertilization for single women.

In more liberal Sweden, the Sweden Democrats oppose government-sanctioned adoption or insemination by same-sex couples or singles. With these conservative policies, the party finished third in the 2014 federal election.

When Denmark decided to legalize same-sex marriage in 2012 (seven years after Canada), the Danish People’s Party opposed the move. It is the second-largest party in Parliament and received 21 percent of the vote in 2015.

It isn’t only parties with social conservative platforms that are performing well in liberal Europe. Parties emphasizing economic conservatism are also having an impact, none more so than the United Kingdom Independence Party (UKIP).

UKIP, which has never held more than two seats in the House of Commons, scored a huge upset by forcing Prime Minister David Cameron to hold a referendum on UK membership in the European Union. Then in 2016, it astounded elites around the world by winning that referendum. UKIP bills itself as libertarian and the “true inheritors of Thatcherism.” It is also a textbook example of how a fringe party can force a mainstream party into adopting a previously untenable position.

These are a few examples of successful political movements in Europe that give voice to ideas outside Ontario’s Overton Window. Where is the party that will do so here?

A new party: an NDP of the right

Conservatives of all flavours would like to see the Ontario PC Party succeed. We want the party to win a majority government and put in place conservative policies.

But Patrick Brown, elected PC leader in 2015, has not shown the commitment to conservative values demonstrated by Harris. Brown’s flip-flops on social issues and his embrace of a carbon tax have left supporters disappointed.

What should be the composition of this new party? It must be more than a social conservative party. The Family Coalition Party was perceived as that and has since disappeared. It must be more than a fiscal conservative party – there are already two libertarian outfits wasting time and energy in this province. And it can’t be only a party of democratic reform. That isn’t a broad enough base for building a viable electoral threat.

Ontario needs a party that can be the home for all those in the political wilderness on the right. A party that holds to a Judeo-Christian world view — not to establish a theocracy but to promote the values that were the majority view in Ontario not that long ago. It needs to be a party that unabashedly speaks for fiscal conservatism in all spheres of public life. That includes those “untouchable” budgetary items health and education. And it must be a party that will advocate for radical decentralization of our democracy. If it works in Switzerland, there’s no reason it won’t work in Ontario.

This new party must be one of compromise — not compromise with the media or the political establishment, but internal compromise, among the three constituencies.

This party must be a party of ideological conviction. Its commitment is to program, not to pragmatism. It should be a refuge for political outcasts, a mobilizer of those with no political home, as well as an educator  —  of the media and other politicians. It has to say the things that people say in their homes but never hear from a politician or a newscaster. This must be a party that validates the beliefs and values of convervative voters who are presently marginalized.

This must be a party of life, marriage, family and faith. It must advocate for smaller government overall, not just “more efficient” delivery of the same programs. It must touch the third rails of private health care, school vouchers, pension reform and labour reform. And it must be committed to radical democratic changes such as referendum, recall, free votes and a considerable decentralization of power. Finally, it must be a party very inclusive of immigrants. Unlike the populist movements of Europe, this party must embrace newcomers to Ontario. These are voters who share our values.

There is a market for a political party espousing views outside the Overton Window in Ontario. By giving voice to even 5 to 10 percent of voters, we can change the discussion in this province.

A well-organized, broadly based coalition of “radicals” can effect change in Ontario, not by winning power but by moving the Overton Window. By bringing our ideas into the mainstream, we can ensure that the old-line parties pay the price at the polls if they ignore this block of silenced voters. 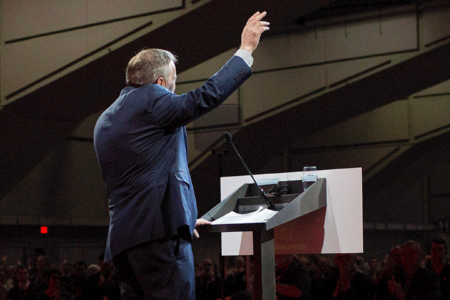 The NDP and the future of social democracy in Canada