Some Canadian politicians lean on old-school masculine stereotypes when making their case for power. But is aggression a leadership skill? par Jennifer Ditchburn 3 février 2020
Partager

One of the most poignant moments in political leadership occurred nearly a year ago, in the aftermath of the devastating hate murders of 50 people. New Zealand’s Prime Minister Jacinda Ardern publicly exhorted citizens to “speak the names of those who were lost rather than the name of the man who took them,” referring to the gunman who opened fire at two mosques in that country. Ardern made her way swiftly into the community, hugging the heartbroken, vowing action on gun control, and speaking of the values of kindness and diversity. Empathy and resolve appeared to be the superpowers of this young world leader.

So, what do we make of the bellicose discourse around political leadership in Canada in 2020?

The putative frontrunner in the Conservative Party’s leadership race, Peter MacKay, told the National Post  that he’d “rather fight (Prime Minister Justin Trudeau) UFC rules. Or on the ice — no headgear, no gloves.” (Ultimate Fighting Championship is a combat sport that can include choking, shots to a rival’s liver, body slams and “grounding and pounding” an opponent who is in an inferior position.)

Back in 2012, Trudeau himself used a charity boxing match with Senator Patrick Brazeau to build a winning “narrative” about himself). MacKay said recently that “(Trudeau) does yoga, I play hockey.”

Another Conservative contender, Erin O’Toole, bragged during his launch that “I speak like a soldier, not a diplomat,” possibly a play on a quote also used by the often pugilistic captain of the Starship Enterprise. (What does a soldier speak like anyway?)

Mixed martial arts, boxing, hockey, soldiering – all things that women can and do excel at, of course, but they’re presented in these political contexts as old-school alpha-male credentials. In their study of masculinity in the 2015 election, scholars Kyle Kirkup and Jerald Sabin listed characteristics that are often associated with the ideal male politician. They include aggressiveness, competitiveness, confidence, strength, and stoicism. Even during the 2019 campaign, Trudeau returned to the boxing ring shortly before heading into a French-language debate.

“While a limited number of men are able to embody this ideal version of masculinity, it is the standard against which all others — including women and less masculine men — are judged,” Sabin wrote.

Justin Trudeau stopped by the Academy De Combat Ultime Ness Martial in Montreal Wednesday morning to get in some training with boxing coach Ali Nestor.#cdnpoli #elxn43

The weird thing is that MacKay, O’Toole and Trudeau are not macho meatheads in person – they’re three decent, middle-aged dads. Still, they’re helping to circulate an outdated message – that political leadership is about being good at combat – relishing the opportunity to throw actual or verbal punches at your opponent. I understand how this appeared to be an essential attribute in the recent on-ice dust-up between Kassian and Tkachuk, but, please, in the House of Commons? Civility, integrity, a cool head – but not one devoid of emotion. That’s what we should want in the Commons.

Last year, 338 young women sat in the House of Commons as “Daughters of the Vote,” an Equal Voice initiative designed to connect emerging leaders with political institutions. Some of them might one day end up in those seats as parliamentarians. Rather than wonder if they’ll one day “enter the ring,” we should look for a different language around leadership – one that doesn’t equate toughness with pugnacity. As author Jill Filipovic wrote in The New York Times, echoing Joan Didion, “the virtues of self-respect — toughness, moral nerve, character — have never been … male-only business.” 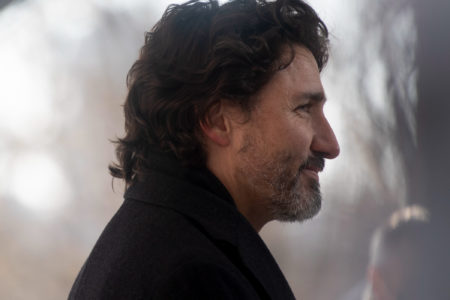