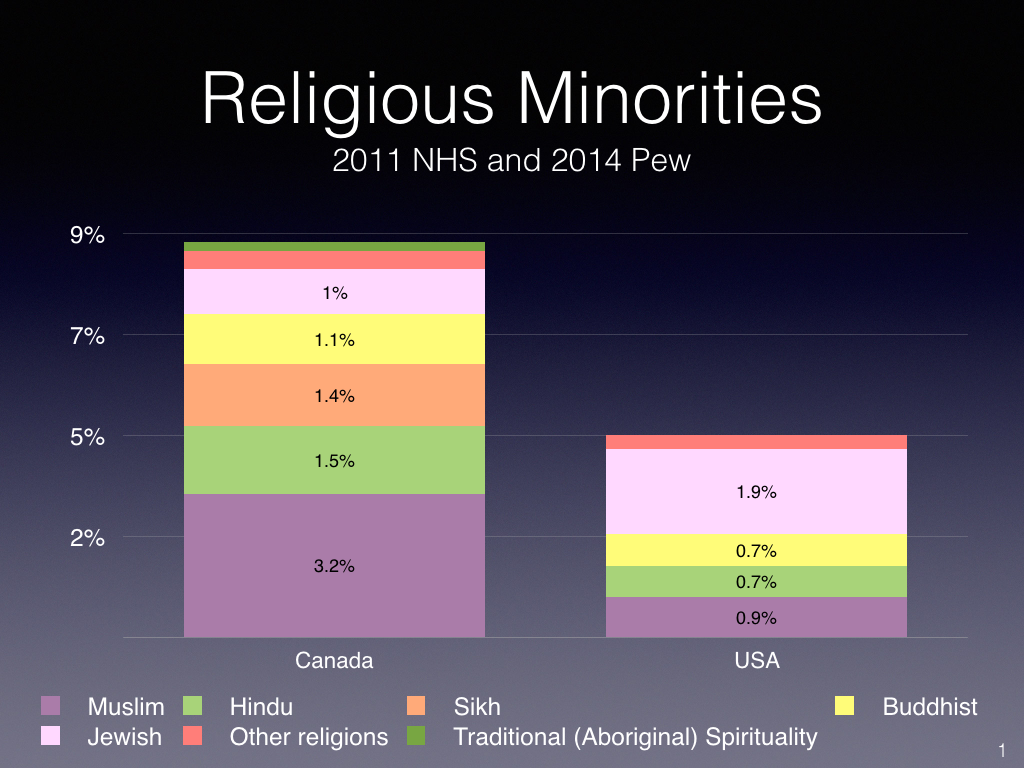 A good long piece analyzing the findings of the Pew Research 2014 Religious Landscape Study, mainly from a political perspective.

The above chart contrasts religious minorities in Canada with those in the USA. The more significant difference is with respect to Christians: some 60 percent of Canadian Christians are Catholic compared to 30 percent of Christians in the USA. Evangelicals form 35 percent of US Christians compared to about five percent in Canada (counting Baptist and Pentecostal as such). This helps explain, in part, the vast difference in political culture between the two countries, given the importance of the evangelical base to the US Republicans.

While the warning to the Democrats that the culturally liberal attitudes of their white upper class elites may create tension with their more traditional Black and Hispanic constituencies, it is unclear whether the ‘culture wars’ play that significant a role compared to more bread-and-butter issues for minorities (in contrast to the Republicans):

As the na­tion re­lent­lessly di­ver­si­fies, both in its radical com­pos­i­tion and re­li­gious pref­er­ences, White Chris­ti­ans now rep­res­ent just 46 per­cent of Amer­ic­an adults, ac­cord­ing to Pew data provided in re­sponse to a re­quest from Next Amer­ica. That’s down from a 55 per­cent ma­jor­ity as re­cently as 2007, and much high­er figures through most of U.S. his­tory.

Demo­crats must weigh the cul­tur­ally lib­er­al in­stincts of their now mostly sec­u­lar wing of up­scale Whites with the of­ten more tradition­al in­clin­a­tions of their Afric­an-Amer­ic­an and Latino sup­port­ers, who are much more likely than White Demo­crats to identi­fy with Chris­ti­an faiths. In a land­mark shift, few­er than half of White Demo­crats with a col­lege de­gree now identi­fy as Chris­ti­ans; that’s a much smal­ler per­cent­age than among the party’s Blacks and Lati­nos.