Today the government gives billions of dollars to Canadian families with kids. What will that do to our economy?

Some people will be pleasantly surprised today to find more money in their bank accounts thanks to the first enhanced payment for the Universal Child Care Benefit (UCCB).

Previously, families received monthly benefits of $100 for each child they had under the age of 6. Now this amount will grow to $160.

Families with kids aged 6-17 weren’t eligible before; now they can receive $60 a month. This change significantly raises the number of eligible families from about 1.6 million to around 4 million.

The policy announcement last October included an unconventional timing for payments. The changes would take effect in January, but July’s payment would be the first to include the new larger amount — and the increments that were missed in the first half of the year.

Here are the payout profiles for families with a child under 6 years old under the new and old policies. 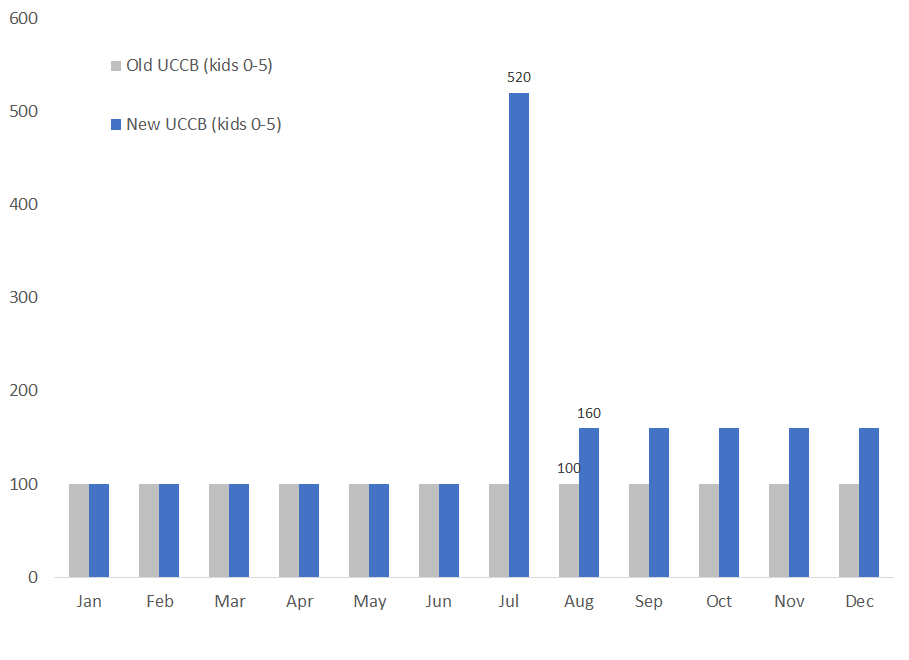 And families with a child between the ages of 6 and 17. The big bulge in payouts in July is hard to miss, and that’s by design. If you have more kids, you get more money and the amount can really add up. The government says that July’s UCCB payments will total almost $3 billion.

On July 20, the biggest single payout in Canadian history will see $2.986 billion land in almost 4 million mailboxes of hardworking moms and dads across Canada.

This means that the average receiving family will get about $750 of taxable benefits in one shot.

I’ll leave to others the political question of whether this move will help the Conservatives win the election, and instead take up the economic question:

Will this monetary injection from the government into the bank accounts of families with kids (70% of whom will get the money from direct deposit according to this Maclean’s story) act as well-timed « fiscal stimulus » for the Canadian economy — which most forecasters now expect to show negative growth in the first two quarters of the year?

As some have famously emphasized, money is fungible. You don’t need to spend your UCCB money on child care. You can spend it on whatever you want. Or you can save it. Or use it to pay down debt.

So, what will people do?

Well, if you’re an economist, you’ll have this day marked on the calendar. You’ll have already determined how much tax you’ll owe on these benefits and will patiently set that amount aside to pay the government next year.

And perhaps if you’re an ardent neo-classical economist, then you’ll faithfully follow the Ricardian equivalence proposition by not increasing your consumption — you’ll just save the entire amount.[1]

But what will normal people do? Their response will depend on their day-to-day budgetary situation and whether they were paying close attention to the government’s fiscal policy announcements.

If they are lower income, credit-constrained or living pay cheque to pay cheque, they’ll likely spend much of the new money. These households have a high propensity to consume out of an additional dollar of disposable income.

Because the government has notionally earmarked this money for child care, then we should expect some parents to apply this same « mental accounting » and view this as a pot of money to spend on their kids. Maybe it’ll cover kid’s day camps this summer. Maybe it’ll be used more generally to buy back-to-school clothes for the kids.

Families with kids are eligible for this benefit regardless of their income. So there will undoubtedly be some high-income households who already have plenty of room in their household budgets. They’re less likely to spend it.

If this money was unexpected, it may be seen as a windfall gain. It might be saved it for children’s education — so we might expect a bump up in Registered Education Savings Plans (RESPs) this summer as savvy financial planners may capitalize on this.

Maybe some parents don’t think they should necessarily spend the money on their kids, but more broadly on their family, and they’ll enjoy a slightly nicer family summer vacation.

And, of course, our business press often worries about Canadian households that are carrying too much debt. These families may see this as a chance to pay down an outstanding credit card balance or line or credit.

The Bank of Canada’s Monetary Policy Report said that

Consumption is expected to accelerate as household disposable income receives a boost from retroactive federal payments to families with children.

And in the press conference Governor Poloz suggested that this effect might add roughly 1 percentage point to consumption growth in the third quarter.  This estimate seems reasonable given the size of the income shock and its fortuitous timing near the start of the quarter.

In sum, various households will do various things with this money. We should expect some increased household spending (including but not limited to child care and children’s items); some increased private savings (maybe focused on children’s future education needs); and some reduced household debt.

Public policy pundits will debate the merits of this policy choice and its alternatives. Political scientists will analyze the political effectiveness of the timing of these payouts. And for Canadian macroeconomists this will be fascinating fiscal policy experiment. It’s almost akin to the hypothetical « helicopter money drops » we describe to our undergrads. And because this policy — like many others that have been used by this government — is targeted to a specific group (in this case families with kids), we’ll know where to look to see the impacts on the economy. In the process, we should learn a bit more about the effectiveness or ineffectiveness of fiscal policy to boost demand.

Finally, while this situation couldn’t have been foreseen last October when it was announced, it looks like the policy will pump some money into the Canadian economy at a time when it could desperately use a temporary boost. Let the great UCCB experiment begin.

[1] You won’t view this money as increasing the net present value of your lifetime personal disposable income because you’ll be far-sighted enough to know that the government ultimately has to respect its budget constraint and will eventually need to raise taxes in the future to pay for this richer program.