Recently, The Agenda with Steve Paikin made us think about think tanks. One recurring theme in the discussion was that it’s hard for outsiders to infer a think tank’s ideology.

Think tanks typically say they’re independent and non-partisan; they’re not left-wing or right-wing, they say they’re « evidence-based ». At the same time, media coverage often features think tank guests from opposite ends of the spectrum. And while the right-versus-left convention doesn’t always generate better policy discussions, by presenting a balanced view, the media can say that they too are unbiased.

The facade that no-one-has-an-ideology generates confusion. So an Agenda producer, Hilary Clark, provided a useful cheat-sheet (from Donald Abelson of Western University) to help viewers navigate these murky waters. This list classified several Canadian think tanks as ”œright”, ”œcentre”, and ”œleft”. Clark acknowledged these categories were problematic and subjective, but thought the list was a useful heuristic that might start a conversation about how outsiders view think tanks.

This blog contributes one simple measure of inferred ideology to the discussion. It uses Twitter data and assumptions about the structure of social networks. Before getting to the results, let’s first review some key players and discuss the basic approach.

The key players
Working at a Canadian think tank ”” full disclosure: working at the IRPP ”” being on Twitter, and being fond of lists, I recently ranked Canadian think tanks based on their number of Twitter followers. This update shows the top 25 in my sample. How might we infer a think tank’s ideology?
This list simply reports the number of followers of each think tank, but I wondered whether these followers might tell us something more about the think tanks themselves.

Approach, assumptions and caveats:
I’m using a broad think tank definition that includes some industry organizations and others that are not strictly ”œresearch” groups. This list ”” and this blog post ”” is not exhaustive, but is simply a first attempt to develop some data.

The goal of the exercise is to assign numbers to things we can’t see and that people won’t tell us. I use two of the most-visible, highly-followed organizations as reference points: the Fraser Institute and the Canadian Centre for Policy Alternatives (CCPA). For the sake of argument, the Fraser Institute will represent a ”œright-of-centre” viewpoint; CCPA will be ”œleft-of-centre”. (My apologies; this will surely offend some people.)

If a think tank has more followers in common with Fraser than with CCPA, then I classify it as more ”œright-of-centre”; those whose followers overlap more closely with CCPA’s are ”œleft-of-centre”. (In jargon: identification assumes homophily or love-of-the-same which is often found in social network studies). Based on this, I try to infer the messy construct of think tank ideology. Of course, where my assumptions are wrong, the results will be unreliable.

Two examples illustrate the basic approach using data from the amazing tool Followerwonk. First, consider the Broadbent Institute. The Venn diagram and accompanying table show that, of their 11,891 followers:

Not surprisingly, then, Broadbent is on the left of the spectrum. My measure of inferred ideology takes area A (as a share of the think tank’s total followers for its ”˜Fraser-likeness’) and subtracts area B (as share of its overall followers for its ”˜CCPA-likeness’). So 4% – 30% results in roughly -26% as a measure of how right-wing ”” or in this case left-wing ”” the Broadbent Institute is.

In the second example the followers of the Macdonald-Laurier Institute (MLI) overlap much more with Fraser (34%) than with CCPA (6%), so MLI scores as right-wing at roughly +28%.

These ideology scores reveal a pleasing ‘think tank smile’ pattern when sorted along a left-right continuum (where I adjust for differences in Fraser and CCPA’s relative number of followers, and report results only for think tanks with over 1,000 Twitter followers to lessen problems from smaller samples.) After the smile, the next thing to observe is that there are lots of think tanks (37 are graphed in these results; my full sample currently includes 54 think tanks. E-mail me if you’d like more details.). It’s possible that this crowded-playing-field-phenomenon alone explains much of outsiders’ confusion about which think tank fits in where.

Next, note that Canadian think tanks seem to be roughly split down the middle ”” there are 18 to the left of centre and 19 to the right using this measure.

The thinks tanks with the highest ”œleft-wing” scores based on this metric are: Caledon; Broadbent; Council of Canadians; Democracy Watch; Parkland Institute; Mowat; Sustainable Prosperity; Rideau; and Pembina.

Preliminary analysis did not suggest any systematic relationship between ideology and Twitter followers. In other words, it does not appear that more extreme ideologies on their own are associated with a larger Twitter following.

These categorizations match up quite closely to Abelson’s and likely confirm what insiders already think. But they also cover far more think tanks and give a sense of magnitude that can allow for finer relative rankings, which could help refine insiders’ prior beliefs. These results can also give outsiders to the world of think tanks a high-level sense of various groups’ general dispositions.

That said, we should always be careful when reducing a complex issue into a single number along a single dimension. It could prove useful for subsequent empirical analysis, but we should be mindful that these concepts are inevitably problematic. Moreover, they are not uniform within a given organization and they change over time.

Finally, of course, these numbers should not be used to pre-judge, discredit or approve of research by any of these organizations without a thorough reading of the evidence provided. More work is needed to better understand these complex issues. Detailed results follow below: 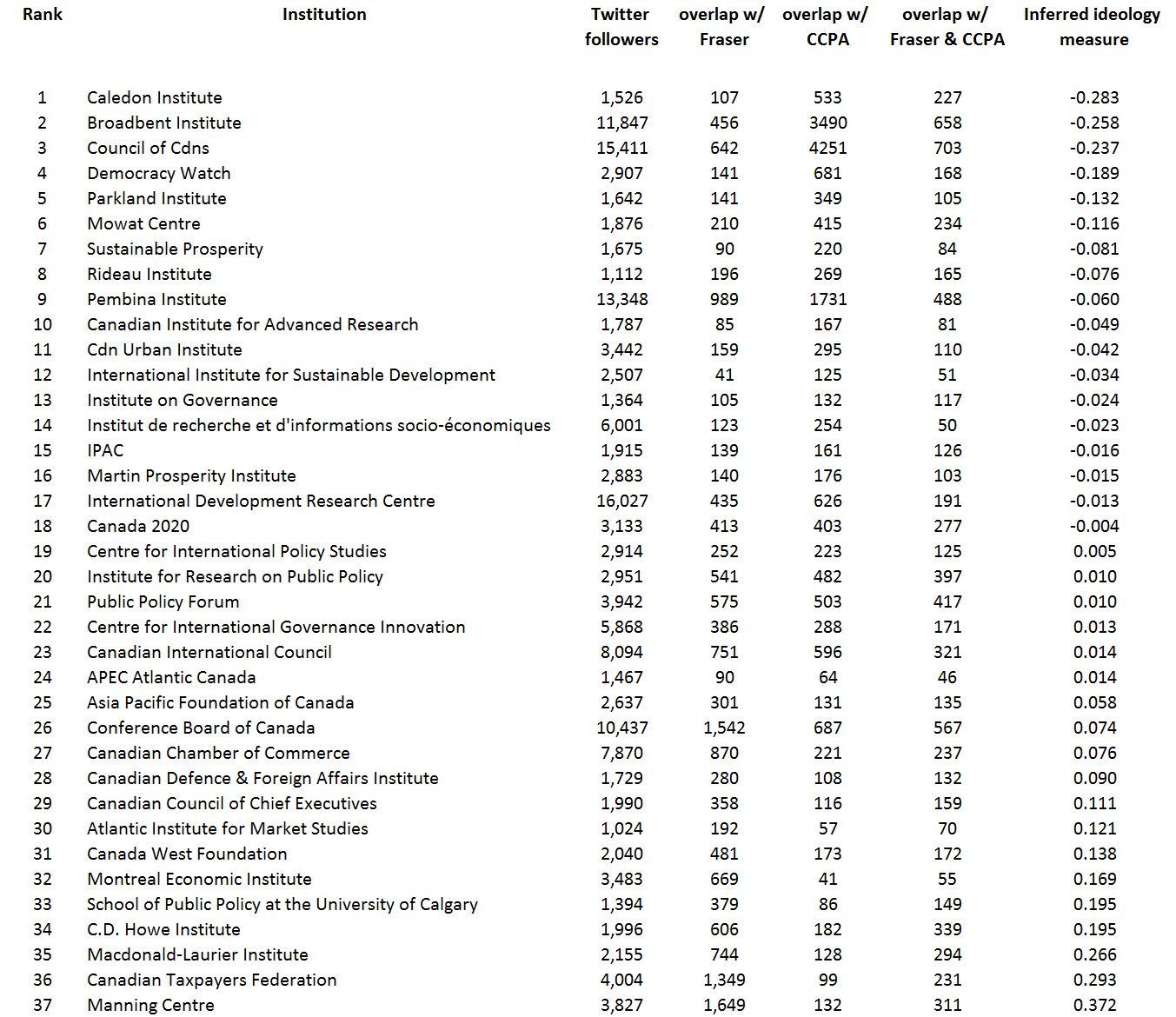